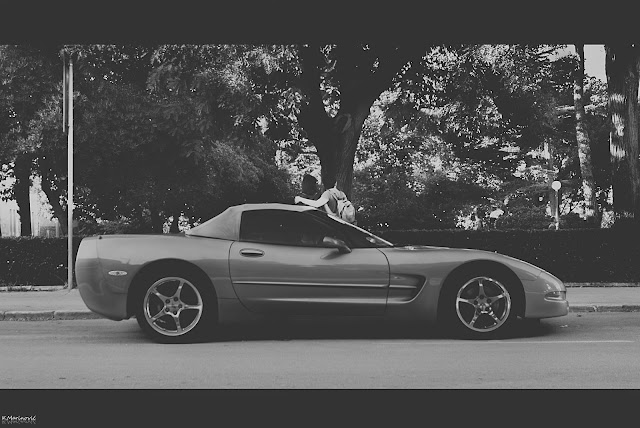 This photo was taken in Zadar, Croatia. Really love this one!

So, when we arrived at the parking lot, I immediately noticed a black Porsche 911 with black rims being parked just a few cars from us. I was amazed by it and went to take multiple shots of it, both with my DSLR and my phone, for social media. Then suddenly, an old man approached me and asked: "Do you like it?". I replied: "Woah, it´s really incredible! An every man´s dream." I thought a bit and asked politely: "Is it yours?" He started shaking his head up and down and added: "It´s my daughter´s. She is from Berlin." When his daughter arrived, he demanded to open the car´s roof just for me to take pictures of it. Really love meeting generous and nice people!

After that, I noticed another true beauty not far from me. A 2002 Corvette (if I´m not wrong)! Painted in golden champagne color, with chrome rims. Being a muscle car fan, I really liked the car! Went to take a few pictures of it, and found this lovely couple hugging behind it. Wanted to take a photo of the Corvette itself, but the shot turned out even better! Love these kinds of moments!

For the editing, I decided to go for that "film look", old school look, 35mm film, Leica, street photography kinda vibe. Added black borders as well! I edited it just in Lightroom and GIMP. I have really started liking Lightroom and the adjustment brush tool! 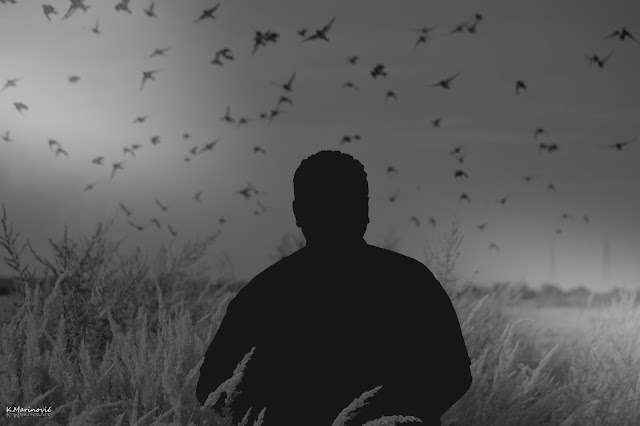 This one is called "Birds". Believe it or not, those birds are not photoshopped... My dad and I were walking the dog and I was taking a portrait of him standing in the field. Suddenly, a bunch of birds started flying as I was taking the shot. The photo turned out amazing! I was really satisfied with the un-edited result, but didn´t publish it anywhere.

One day, when browsing through my old photos, I decided to pick this one and see what I could do with the editing. I was editing it in GIMP, which means that the selection of the silhouette was a real pain... The selection tool in GIMP is nowhere near as good as the Photoshop one, so I had to use the free selection tool, zoom in really a lot and take my time with the selection. The choice of turning it into a silhouette was quite a natural step in my photography, as IMO everything has more dramatic and artistic look as a silhouette.

The atmosphere in this one is really crazy. Very surreal. The internet said "Alfred Hitchcock" atmosphere... 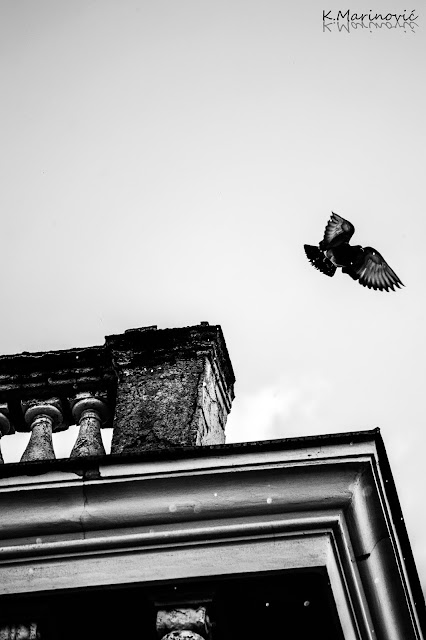 "Going Back Home" was taken in Hungary. It was an ordinary day and we were just walking on the streets, took a few nice street shots, nothing too crazy. I do love street photography, but it just doesn´t induce any feelings... It was a sunny day, but suddenly, it started raining. We hid and waited the rain to stop. This bird just landed on a tall building and I wanted to take a shot of it just sitting there on the building, but the bird started flying and the shot turned out even better! Luckily, I had the 55-200 mm lens, so I was able to capture it perfectly.


Could´s resist turning it into B&W. Also, brought the clarity all the way up to emphasize the detail on the wings. I also like the clean sky, without clouds. It was edited in Adobe Photoshop Express on my phone, like most of my images at the time. It´s a really good quick editing solution if you don´t have a computer with you or if you don´t want to bother with transferring the photos on a computer and editing them on it.


The moments like this ARE photography. It´s all about catching that moment, when you don´t expect anything. It was spontaneous, raw, true passion. 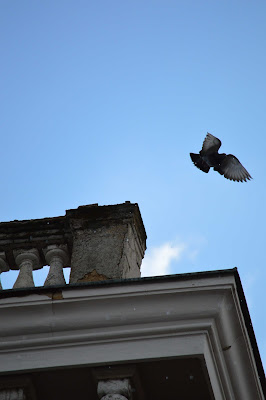 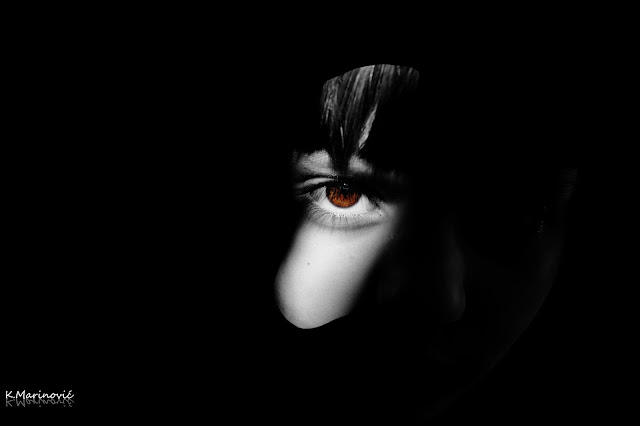 The idea of this photo was to make it look like a shot behind the keyhole. At first, it was a very dark portrait, her face was the only part of the photo in light, and the rest was just very dark, so I decided to use a brush tool and just paint the rest of her face in the shape of a keyhole. I edited the photo in B&W, but later decided to turn it into a color-splash one. In B&W, her eye wasn´t so strong and noticeable. The photo was edited solely in GIMP, mainly using just a black brush tool.

I took this shot in my backyard, during an ordinary summer day without any obligations. Shot with just a kit lens, so nothing special there.  „There is no cheap equipment, only cheap photographers“

Eventually, I started understanding how unique this photo really is and it has become one of my favorite photos. The photo got a lot of recognition on social media, mainly due to its unique look.

This is the evidence that you don´t need a DSLR and loads of lenses, a studio or a model. All that can stay behind for a good idea. The idea is what really matters, what makes a difference. 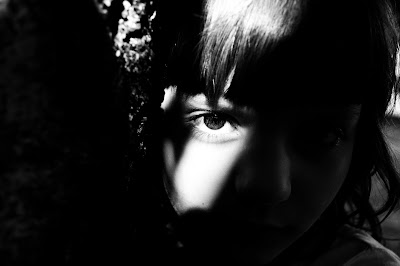 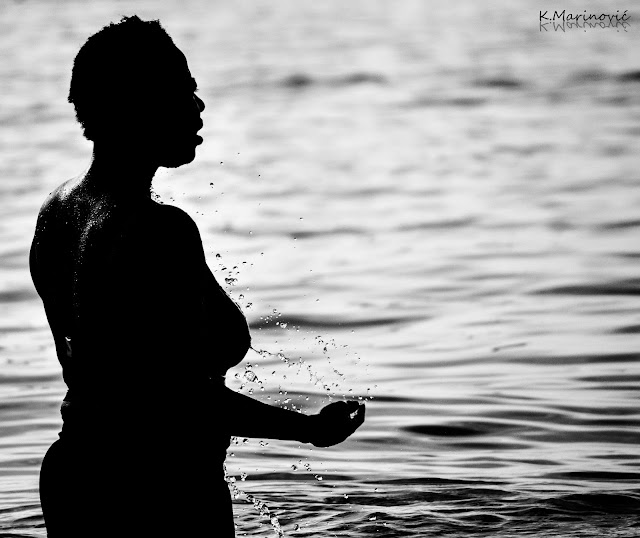 This photo was taken on the island of Vir during the summer of 2014. I was on the beach and there wasn´t much going on to be honest. I was enjoying the peace that I had with just a few people around me. Afterwards, a group of people from France, I believe, came to the beach and seemed really happy to be there. This black woman was with them and she seemed like she hadn´t been to the beach before. It felt quite magical, she started slowly splashing her with water while she was entering the sea. Really loved shooting it, although I had to be really stealthy. The moments like this are the reason I do photography.

The editing process was simple. The photo was edited on my phone using Adobe Photoshop Express. The contrast was bumped quite a lot, in order to make the silhouette even stronger. Of course, I turned it to B&W like always. Especially love the detail on her back and those drops of water just frozen in time! I also sharpened it quite a lot. Maybe even a bit too much as the background starts being a bit grainy as you can see.


I don´t have any prototypes of the photo as this was edited in one take. Pretty brave, I know...


Probably one of my favorites. There is something about this photo that makes me feel happy. Such a magical moment, the happiness on her face... Really like scenes like this. 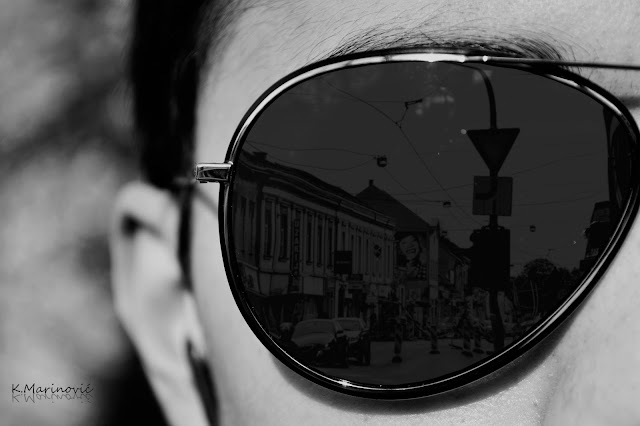 This photo was actually edited a lot later than I took it. It was made with a very strong message, inspired by a tough state I was in at the time. I was pretty demotivated by the environment I lived in. Village life, poverty...Thought it was impossible to succeed there. Then I discovered internet marketing, selling photos digitally, and kinda found the right way.

It is, without a doubt, one of those „Look, he used Photoshop“ photos. A bit too much of editing for my taste, as well as many other people´s, but definitely a strong image. Basically, I merged two photos, one of my friend looking at the lens, and another of just a street in a big city. It presents hoping for a better life in future, wishing for opulence, living in a bigger city...

I edited it in GIMP, made a lot of prototypes before the final photo, it was really hard to simulate the perfect reflection in the sunglasses. I really like the surreal atmosphere created in the photo. Looks great in B&W.

Here are the prototypes before the final image. As you can see, it looked really bad at first... 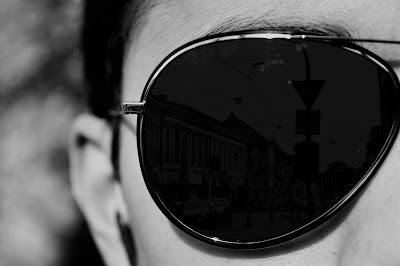 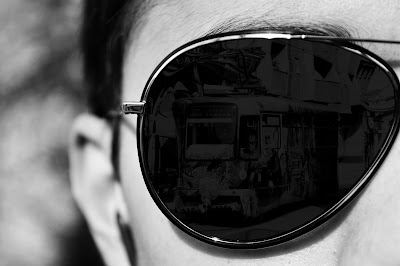 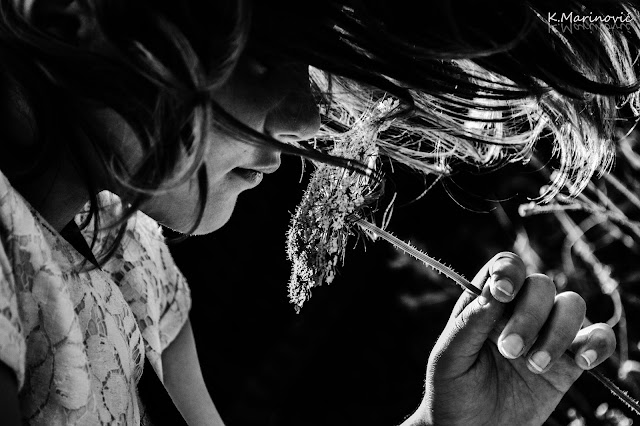 So, this is probably my most popular photo. It has definitely been very successful. The photo was taken right in the backyard behind the building where my grandma worked at. The model was my little sister as she was sniffing the flowers. It took me about 20 shots until I got the one I was finally satisfied with.


It also took a lot of editing to get the final result. First, I turned it to B&W like I always do, and after doing some refinements, I realised it would actually be better to flip the picture in landscape orientation. That was the right choice as the picture looked much „stronger“. I´ve done all the editing for this picture on my phone in Adobe Photoshop Express. It was the app I was really impressed with at the time, so I edited most of my photos from that period in it. I threw in a lot of contrast in the photo and added maybe a bit too much sharpening.


The photo got into 500px Editors´ choice only a day after I uploaded it. I was scared to even make a 500px account for a long time, because it was mostly for professionals who made money through it. Getting it published was really an honor. 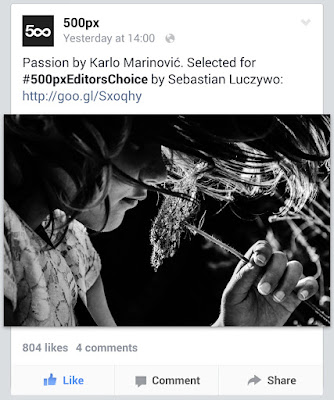